Kennedy Susanne. 2003. 'In the heat of the Moment' in RealTime arts (online exclusive)

Warren, Angela 2003. 'cross art form grand slam' in lowdown arts magazine October
NANCY MAURO-FLUDE PRESS /REVIEWS
"Mauro-Flude delighted the audience with images of innocence expectation and delivery... the antics of all those little pink bots could only put a smile on the face of much of the wide-ranging audience."
- Graham, Leslie. 2011 'Life, death and Big Questions' in The Mercury Tuesday January 18. p. 13.

"Sitting with her back to the audience, Nancy Mauro-Flude uncovers—visually opening up—the insides of the operating system behind our daily computer interactions. Through enquiring conversations, the amplified sound of Mauro-Flude’s fingertips dancing across the keyboard beautifully conveyed the poetics and isokinetics of machine and human intelligence."

"Don’t be scared; brace yourself"

"What are they building in there?" the Tom waits song repeating in my head. I was totally mystified as to what the aim of this performance/event/piece would be exhausting every conceivable avenue of art my mind could think of I still had no idea what was going on. An oddly intriguing individual baffled me with strange talk about proxy servers and such advanced technical jargon that my poetic little mind literally boggled, in a good way...Performance art to me was based around all I knew and had seen, mainly poetry readings and staged plays. I had never heard of ISEA but over the next few weeks I would be enlightened as to the boundless possibilities of performance art in it's many beautiful guises.

"she’s undoubtedly a talent and I look forward to whatever bizarre ditty she comes up with next."

Briony, Kidd (2009) 'Toussaint' in The Australian Stage. 27 October
http://www.australianstage.com.au/200910262951/reviews/tasmania/toussaint-|-the-southern-belles.html
Nancy Mauro-Flude is a performance artist who has used mobile Linux as part of a device intended as an artistic and political statement. The subversive possibilities of such a device are clear. Nancy was clearly aware of those issues. Others will certainly follow this particular artist's lead; expect to see more mobile devices which record their immediate environments and put the results on a server for all to see. It is going to be interesting.

"The presentation of Nancy Mauro-Flude was both chatÃ­ssima and excellent. The artist passes an enormous time moving in frequency oscillators. This generates that statical exasperante noise. She has several in place. After a time, she goes for the microphone. While she deals with the oscillators is a person. When she sings, she is robot.
On the stage, besides the oscilators, there is only a little red 'paete' purse. This is the only thing that does not sends out any sound.In its silence the purse screams the automatism of an esteriotipated feminine.

"Sister O, an eccentric solo artist who combined with quirky head jerking movements and 80s robot like dance moves was a refreshing act to watch and be entertained by. Not only were the dance moves so in time and perfect for the music, there came the
surprise of the singing the sensational singing. Sister O has a voice like an angel well a zombified angel. "

[Profile IMG 01]
"Speaking of technobiopolitics, and all subjectivity as mediated through 0 and 1, sister0 (a.k.a. Nancy Mauro-Flude) performed the film-lecture-performance Sister0,'queen of uncensored data' connects in my first burial the Shaman Rattle of an exoticised elsewhere with todays technopolitics. Here, Sister0 shows in lines of thought and performance the desire to transcend time and space as patterns of continuity, while the concrete historical fields changes, but she never forgets about the sexual politics immanent to these fields as situated practices. It was hilarious and serious, funny and destructive performance, dealing with questions of life and death as it was encapsulated in Marx reading: amaking the ossified conditions dance by singing them their own melody."
World-Ex-Position Vienna (2008) Fahim Amir http://www.metamute.org/en/node/11500

'On sensitivity in art of women' Frieraum Q21, Museum Quartier Vienna. (2008
"Performing artist and 'queen' of uncensored data, provides her audience with a sensitive view on the uncanny repetition of 'dead girls' in life, art and literature; with the work 'My First Burial'.

-Skin is longing for a cream" – Curator Ivana Moncolová (SVK)

She picks up a paper bag blows into it to inflate again and again as she again crosses the abyss. What does it mean?
We don’t know but definitely one to watch for in the future.

I first encountered the work of Tasmanian performance artist and media researcher Nancy Mauro-Flude at The Art of Hacking exhibition opening at the Netherlands Media Art Institute (NIMk) on September 9, 2011. Mauro-Flude’s Error_in_Time(V.T_3), a poetic coding performance...inspired questions on the radicalism and embodiment of FreeSoftware and free spirits. - Kendall Grady 31 October 2011 RFC.museum

Hacker, feminist, performance artist and theorist, Nancy Mauro Flude brings us in a world where toys and techniques are being desecrated, where little girls dig and fiddle with their dolls collection, where ustencils, instruments, endowments and accessories have the right to be discovered, examined and transformed. Gray magics, hijackings, driftings and seizures of power are many of the sensitive and subversive subterfuges by which the artist urges, twist and explores the esthetic politic of the open source spirit -.dpi 22 : Free Culture :: Anne Goldenberg

[hi-res press IMG 02]
Feel free to contact me regarding interviews or aquiring media for use in articles. I don't have a LinkedIn account and neither do I have a public telephone number. To keep in touch with what I'm interested in currently, follow me on twitter. [here]

Nancy Mauro-Flude is an artist who not only understands the language of code, but also has the ability to use it as a vehicle for literary exploration and artistic outcomes presentable to a visual arts audience… in a pitch-black space is beautifully overwhelming and it is hard not to be drawn into the complexity of not only the work, but of the artist…this is an artist operating with a language and expertise that most of us lack the ability to access, questions surface about our own ambiguous relationship with computers and just how passive we are as users. I believe that work like this opens up the gap in knowledge like a flexed muscle splitting stitches….The work of Nancy Mauro-Flude offers us something visually appealing, deeply thought provoking, and suitably confounding. Just the way I like it.

-WRITERESPONSE - Patrick Sutczak
Organizing the performance around the input received, almost on equal bases, from the live performer, the media solutions and the audience participation, the theatrical space turned into a much more complex interface. The extended possibility of action-reaction patterns allowed the experiencing of the performance in a broader, personally intricate sense, and made the perception of it shift toward a more complex, mental, actively created design. The involvement of the audience could thus enable a potential spectator to be conceived in terms of ‘mixed-media’ engagement. Being equaled with the role of technical devices in performance involvement a spectator appears as another ‘medium’ of the feedback transmission. The concept of the performance stretched the initial connotations the word ‘mixed-media’ to more elaborate, highlighted in the performance, human dimensions of the term. Rejecting the limitations of restrictively reciprocal actor-to-spectator form of presentation, the opening of more varied, multifaceted and multidirectional streams of meaning, active consideration of the fact that the virtual pervades the physical, the blurred penetrates the clear, the mediality permeates the real and that it all happens not independently of an individual’s pervasive actions. These computer-processed forms of aural and visual expression created the well structured foreground of the performance meanings construction. The staged theme of the in-between worlds (of the living and of the dead) transmission and transference was ‘actively embodied’ in the virtual stage design. The permeation of media provided a discursive and explicit context for pervasion of meanings and gave a solid possibility for their personal interpretation. With an evident implication to modern technological possibilities, the performance played upon their illusiveness that they are as well capable of producing. The media ‘virtual’ but epic potential was lyrically incorporated into the messages inexplicitly conveyed by the performance scenario and well composed together with the physicality of the performer.

The Brighton Digital Festival launched in coded fashion. Performance artist Nancy Mauro-Flude presented Error in Time, a performance which transpired to be an intimate exploration of the relationship between mankind and machines…an intimate live diary entry on modern day computing and its relationship to art…a fine starting point for the Brighton Digital Festival 2012 and a great discussion point for the newly re-launched E-Permanent, posing interesting questions about the relationship between art and technology and encouraging artists and programmers to imagine the unimaginable.

Once ensnared, viewers are drawn into considering deeper themes, Tasmanian artist Nancy Mauro-Flude’s newly commissioned Valetudo is one such work. With its vivid, glistening sequins, the ornate healing flag is magnetic. It blends Haitian Vodou Flag traditions with the form of a lotus while alluding to Tasmanian Aboriginal elder Auntie Ida West. Hidden within the work is an augmented reality level accessible by the smartphone app Layar. Delving from the physical into the digital is an interesting secondary mode of engagement, one that is surely going to increase in coming years.

Investigating the unexpressed potential of low-fi technologies means exploring the primordial form of the relationship between man and machine. The work of the conceptual artist Nancy Mauro-Flude comes on a more experimental side. Error_in_Time is a performance based on the relationship between the computer operative code and the user. By using literature, live coding and lo-fi graphics, Error_in_Time provides a consideration on technology and on the value of privacy in a world dominated by big data.
Retrospective, BLINK Magazine, Gianmaria Vernetti, 2014 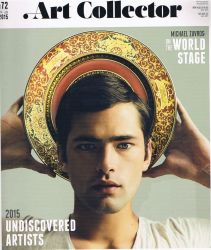 As a result of her extensive experience, Labyrinth of the World is Mauro-Flude's Strong entrance into the commercial art market. "Her success both nationally combined with her originality and grasp on technology sees her at the forefront of her practice and sets her apart from others"
Feature Art Collector Briony Downes, 2015
rarely updated 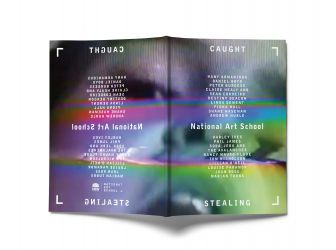