"The symbols of the divine show up in our world initially at the trash stratum."
Philip K. Dick 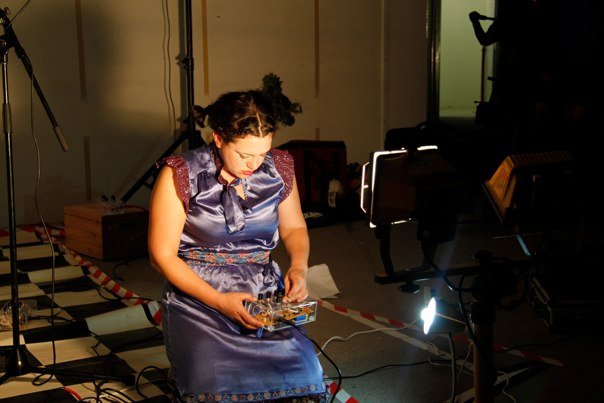 ode to the history of paraphernalia...
It's source in Medieval Latin, paraphernalia was the bride's property apart from her dowry as separate or personal belongings and property of a married woman that she can dispose of by her own will. This included personal amulets, jewelry, menstruation items etc. We can clearly see the subordinate usage of the word paraphernalia still exists if we conduct a search in ‘google’ the results.

It is undeniable that these sub-set objects and their function are still positioned as dubious or taboo topics in the public domain, things that are judged as wasteful and excessive, (even items as fundamental as menstruation paraphernalia has a luxury tax). 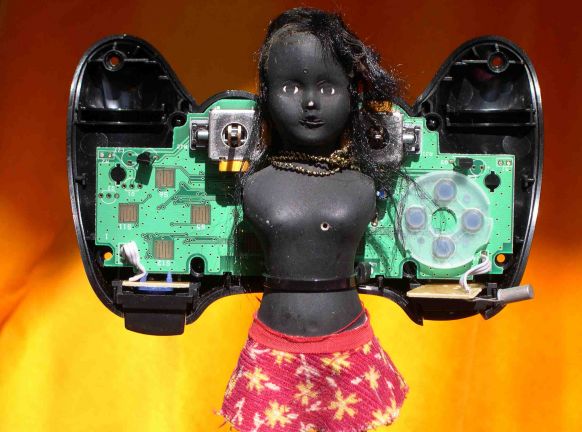 'Paraphernalia' is a project by Nancy Mauro-Flude questioning aspects of live performance in the age of prerecorded sound and the cliché of laptop musicians. She uses dolls modified with game-pads as music instruments interfacing the Pure Data live procession language, and a complex set up with motion sensors on a tiny stage. Using the dolls as wireless instruments and background singers Nancy Mauro-Flude can perform on stage and simultaneously control her equipment. Moving and manipulating the dolls she evokes a vaudeville techno electro-clash version of a karaoke singing ventriloquist.
Mirko T Schafer
http://mtschaefer.net/entry/media-design-exhibition-worm/
"Sister O, an eccentric solo artist who combined with quirky head jerking movements and 80s robot like dance moves was a refreshing act to watch and be entertained by. Not only were the dance moves so in time and perfect for the music, there came the surprise of the singing the sensational singing. Sister O has a voice like an angel well a zombified angel. "
Briony Kidd
http://www.jacbowie.com/blog/?p=5632
Reviews
"The presentation of Nancy Mauro-Flude was chatíssima and excellent. The artist passes an enormous time moving in frequency oscillators. This generates that statical exasperante noise. She has several in
place. After a time, she goes for the microphone. While she deals with the oscillators is a person. When she sings, she is robot. On the stage, besides the oscilators, there is only a little red 'paete' purse. This is the only thing that does not sends out any sound. In its silence the purse screams the automatisation of an esteriotipated feminine.
http://aguarras.com.br/2009/07/13/verbo-2/
'Set on a small makeshift stage remininscent of eraly 20thC fun fairs, Nancy appears right at the centre of the action dressed in a dress which appears to be composed from as many sources of material as the rest of
the stage. Everything seems to have come right from a Mad max movie heavily impregnated with very colourful trash aesthetics. Using the various devices intended to produced audio glitches, she manipulates a set of prerecorded
pop songs as well as her own voice live on stage."
Florian Cramer and Anke Arns WORM Rotterdam
"Noise is always transgressive and as such it is part of the obscure. Even in contemporary music, in which it is largely accepted and perceived as an inextricable part of a track or song, loud or dissonant sounds are still recognizable as noise. Noise cannot be safe. Noise is accepted as music, but it is still an outsider, a polluter, a sign of dissidence and discordance. Much like the ultimate state of perfection, the divine, the ultimate noise equals the experience of near death. The ultimate in noise is that of white static: the death of the televised image. Whereas the Futurists created music that more or less celebrates technological productivity, Piet Zwart graduate Nancy Mauro-Flude seems to pay homage to its neglected, inescapable imperfection. She has built her own noise instruments from trash, to be used in her performance art. Performance art is noise by many standards (as art is often perceived as superfluous in itself and performance is the most fleeting form of it), yet in the environment of media art it tends to represent the source of all technological imperfection: the body. Nancy Mauro-Flude's "breakcorenoise- performance" 'Paraphernalia' is a temporary (re-) combination of dance and noisy, trashy and poetic fragments."
Josephine Bosma
http://www.nettime.org/Lists-Archives/nettime-l-0707/msg00005.html 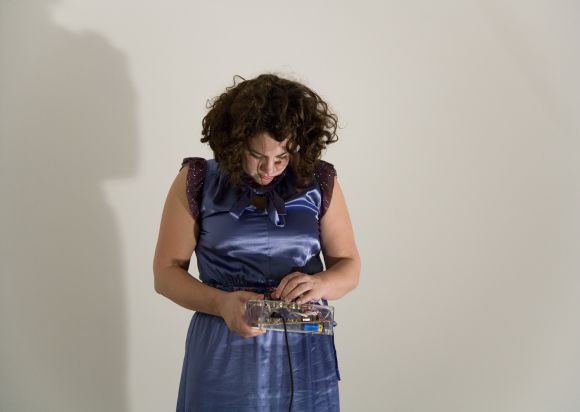 Nancy Mauro-Flude demonstrates her "paraphernalia", a refreshingly bizarre concoction of an interface-joystick-remodified-voodoo-doll. She speaks about performing vaudeville, a kind of digital cabaret (greetings from Valeska Gert), and doing it live yet within/inside the virtual world of a mod-game landscape. Her starting point is a theatrical model of performance, but here infused with the knowledge of coding, software, and new media tools, game engines, webstreaming performance techniques. In one of her documentations of a previous performance with her paraphernalia, she is seen wearing a long extravagant yellow gown, and her magic wand is a long rod with which she tele-transports her audience.
dresses (in emergencies) Johannes Birringer
White Cube Version - video clip VERBO Peroformance Fest Sao Paulo