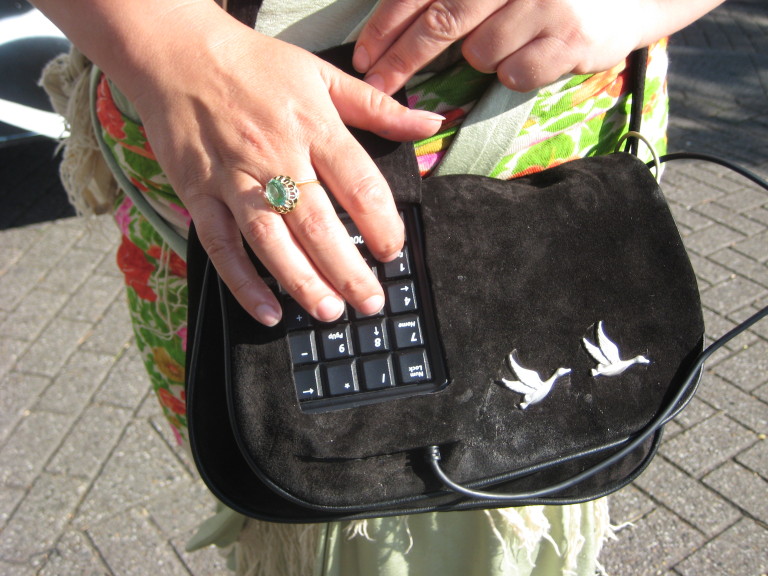 Linux Conf- Jonathan Corbet January 21, 2009
Nancy Mauro-Flude is a performance artist who has used mobile Linux as part of a device intended as an artistic and political statement. The Baglady device is a purse with a numeric keypad on the outside. Inside, it contains a Linux-based system with wireless networking. A camera and microphone have been discreetly placed on the strap. When enabled, this device captures pictures and audio from its owner's travels, then immediately uploads them to a remote server. It allows its owner to capture the events around her, perhaps in situations where recording devices are not appreciated or allowed. The immediate-upload feature ensures that the data gets out, even if the device is discovered - at least, in places where an open access point is available. The subversive possibilities of such a device are clear; so are the potential privacy problems. Nancy was clearly aware of those issues, but, arguably, has not worked through them completely. Others will certainly follow this particular artist's lead; expect to see more mobile devices which record their immediate environments and put the results on a server for all to see. It is going to be interesting. https://lwn.net/Articles/315705/
Exhbitions and Presentations
Articles and Press (selected)
The Bag Lady: Trading secrets, spreading news - Mirko Tobias Schaffer
Originally conceived as a modular tool for performances, sister0's bag can serve many different uses. Using open source software and providing a documentation of design and technological specificities is a crucial and deliberate aspect in sister0's work. As an artist and a designer she forges the raw materials of her art to fit more than just the work of art itself. Basic research, appropriation of electronic consumer goods and applied technological design constitutes a work of art that consequently questions the apparatus of production and opens a range of unknown possibilities for others to employ and extend upon. Instead of creating yet another black box that just blinks, sounds or does something funny, sister0 provides a literally open bag full of possibilities...
2009 Artists using free Software Baglady2.0 streaming on the fly. Referred presentation in Linux.conf.au 'March South' Australian Linux conference. Hobart Tasmania.
2009 Bag Lady 2.0 PS2 Gallery. Belfast. ISEA Spark Platform, Curator Kathy Ray Huffman
2008 Bag Lady 2.0 The League of Imaginary Scientists & Pip Stafford. Gallery 6A. North Hobart, Tasmania
Tech Specs
1x Alix3c3 mini euro-card format with Audio, VGA and Award-BIOS [super expandable] 500 MHz Processor
1x wireless card 1x mini pigtail for external antenna
1x Battery Power 12 V
1x 8 Gb Cf card
1x USB webcam Logitech CamPro 9000 is 1600x1200 (HD-TV)
1x 4 port mini-min USB hub
1x numeric keypad
1x external battery power for 12 v 800ma and recharger
1x Black Handbag.
Software—some of the file parsing is seen in Figure 6
Bash script command syntax
LFS Linux from scratch
KNOPPIX kernel
Audio streaming darkice as client. Encoding ogg vorbis
Webcam UVC video module